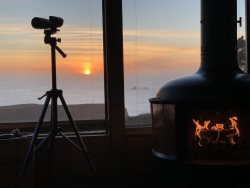 A Brief History of Sonoma County

125 million years ago the area now known as Sonoma County was a part of the sea floor. At times this floor was covered by many thousands of feet of water teeming with all varieties of marine life. This sea floor continually received sediments from neighboring lands to the east; all the while, at depths of several miles, vast masses of molten magma slowly migrated upward to solidify as crystalline rock.
12 million years ago forces deep within the earth began forming what are now the mountains of northwestern California. These forces brought the ocean floor above sea level and exposed the sediments to wind and rain, where erosion shaped mountains and valleys. The topography was one of low, rolling hills with many lakes occupying valley areas.
Two million years ago volcanic activity broke out to the east. Many volcanic vents and cinder cones spewed out volumes of lava and ash as eruption after eruption took place. By the close of this activity, a broad volcanic highland had been formed along what is now the eastern boundary of the county. To the northwest, near what is now the town of Annapolis, there was a long, low, northwesterly-trending valley which was slowly being filled with soft, sandy sediments. Similar materials also were being deposited farther south on the plains which sloped gently from the volcanic highlands to the sea.
Once again, mountain building forces came into play, and the long valley near Annapolis was slowly elevated until only its remnants are seen today along the ridge tops. Meanwhile to the south, geologic forces were shaping Sonoma\ and Kenwood Valleys. To the west, however, were still rolling hills, and no evidence of the Santa Rosa Plain could be seen. About one million years ago, during the Pleistocene Epoch, a syncline began to develop west of Sonoma and Kenwood Valleys. Continued arching of the sediments eventually created the Santa Rosa Plain. Toward the close of this epoch, sea level stood about 300 feet (91 meters) lower than it does today because of the vast volumes of water locked in the glaciers of the great ice ages. Drainage from the Santa Rosa Plain originally flowed south toward San Pablo Bay, but uplift near Penngrove blocked this southward drainage. Subsequently, drainage turned toward the Russian River, which continues to carve a westward course across the Coast Ranges.

The region of Sonoma was originally the home of Native American Coast Miwok tribes as well as the Pomo people and Wintuns. Many of the Native Americans still remain, even after seven changes in government since the Spanish first explored and took over the region as far north as Point Loma.

Spanish claims to the west coast of North America date to the papal bull of 1493, which divided the entire globe into Spanish and Portuguese hemispheres for the purpose of establishing colonies. In 1513, this claim was reinforced by Vasco Núñez de Balboa, the Spanish explorer, when he claimed all lands adjoining the Pacific Ocean for the Spanish Crown. Spain took little action to actually colonize the claimed territory north of Mexico for over two centuries. Most of the coast north of California was unexplored by any European nation until the 18th century with the exception of Sir Francis Drake of England.
In 1563, at age twenty-three, Sir Francis Drake made his first voyage to the New World. After subsequent voyages to the New World, on 17 June 1579, Drake landed somewhere on the Pacific Coast north of Spain’s northern-most claim. He found a good port, landed, repaired and restocked his vessels, then stayed for a time, keeping friendly relations with the natives. He claimed the land in the name of the Holy Trinity for the English Crown as called Nova Albion—Latin for “New Britain”. Some believe this landing took place at Drake’s Bay just south of Sonoma County. Some believe Drake landed further north looking for the fabled Northwest Passage and a quicker route home. His ship, The Golden Hind began icing up and Drake turned into the open ocean sailing east to Asia. Here he loaded rare and precious spices, nutmeg, cinnamon, mace, cardamom and others and then sailed home to England to the delight of her Royal Majesty, Queen Elizabeth The First. The Golden Hind contained, in Spanish gold and Asian spices, the equivalent of the annual sovereign taxes gathered by The Exchequer.

Starting in the mid-18th century, Spain’s vast claim began to be challenged in the form of British and Russian fur traders. King Charles III of Spain and his successors sent a number of exploration expeditions to the far north between 1774 and 1793, to ascertain the threat of Russian and British encroachment and to assert and strengthen the Spanish claim. During this period of history it was important for a nation’s claims to be backed up by exploration and the “first discovery” of particular places.
The town of Sonoma, El Pueblo de Sonoma, began with the Mission San Francisco Solano founded in 1823 by Father Joseph Altimira of Spain. This mission was the farthest north of all 21 California missions connected by a “Royal Road” called El Camino Real. The Mission San Francisco Solano was the sole California mission established under the rule of a newly-independent Mexico, and the last. Soon after it was built, it was secularized by the Mexican government, under the orders of Lieutenant, later General, Mariano Guadalupe Vallejo.

Mariano Guadalupe Vallejo
Under Vallejo’s supervision, the El Presidio de Sonoma, or Sonoma Barracks (part of Spain’s Fourth Military District), was built beside the mission for the army, and he pursued control and order in the region over the native tribes and kept a military eye on the Russians of Fort Ross. Vallejo’s relationship with the Native Americans of the region was helped by another resident of Sonoma, his friend and ally the native called Chief (Sem-Yeto) Solano of the Suisunes who had been baptized at the mission. Sonoma was also the first place in California to fly the “Bear Flag”.
El Pueblo de Sonoma was laid out in the standard form of a Mexican town, centered around the largest plaza in California, 8 acres in size. This plaza is surrounded by many historical buildings, including the Mission San Francisco Solano, Captain Salvador Vallejo’s Casa Grande, the Presidio of Sonoma, the Blue Wing Inn, the Sebastiani Theatre, and the Toscano Hotel. In the middle of the plaza, Sonoma’s early 20th-century city hall, at the plaza’s center and still in use, was designed and built with four identical sides in order not to offend the merchants on any one side of the plaza. The plaza is a National Historic Landmark and still serves as the town’s focal point.
Fort Ross - The Russian Colony in California

Records show that after 1812 there were from twenty-five to one hundred Russians and from fifty to one hundred twenty-five Native Alaskans at the settlement at any given time. The number of the Kashaya, who came to work as day laborers, varied with the seasons. Records indicate the presence of only a few Russian women in the colony (the most prominent of whom was the wife of the last manager); "creole" and Alaskan women were somewhat more numerous. However, during the life of the colony, a number of Russians and Alaskan natives married California Indian women—Kashaya, Coast Miwok and Southern Pomo—with the consent of tribal and Company authorities. The children at the settlement, who made up about a third of the residents by the mid-1830s, were almost all considered as "Creoles," born of these ethnically mixed unions.

Everyone in the vicinity of Fort Ross labored for the Russian-American Company. The organization and operation of the colony followed the same general pattern as in the Company’s Alaskan settlements. The Ross colony, as in Alaska, was headed by a manager. He was paid a salary and given living quarters, and, although he also had servants, he worked as hard as any of the colonists, even finding time to tend a garden to add to the food supply. Kuskov, the first manager, was a particularly avid gardener, growing cabbage and beets for pickling, with enough produce harvested for shipments to be sent to Sitka for distribution in Alaska. The Ross settlement had five managers during its existence—Kuskov served from 1812 to 1821, Karl Ivanovich Schmidt from 1821 to 1824, Pavel [Paul] Ivanovich Shelikhov from 1825 to 1830, Peter Stepanovich Kostromitinov from 1830 to 1838, and Alexander Gavrilovich Rotchev from 1838 to 1841.

The venture of the Russian-American Company into California was short-lived. However, the memory of it has lingered long, preserved in the buildings and the stockade at Fort Ross, both original and restored, in the place names of scattered creeks and coves along the northern coast and of the largest river in Sonoma County, and in the vestiges of Russian and Native Alaskan influence on the Kashaya Pomo language and culture. The Russians were the first to explore and map parts of Northern California, and they were also the first known Europeans to climb Mt. St. Helena.

The abandonment of Fort Ross was a harbinger of Russia’s withdrawal from North America altogether. The Russian-American Company’s profits continued to decline, and, when the Company’s charter expired in 1862, it was extended thereafter only provisionally. Meanwhile, Russia’s preoccupation with developing its newly acquired Pacific territories north of China was increasing, and the prospective costs of continuing to maintain the outposts in America, especially in the face of a growing British presence, led Russia to sell its Alaskan holdings to the United States Government in 1867, thus terminating a century-long territorial presence in America. In retrospect, the withdrawal from Fort Ross, Russia’s easternmost outpost, signaled a turning point in the expansion of the Russian Empire. As the world’s largest contiguous empire, Imperial Russia chose to redirect its energies and consolidate itself on only two continents instead of three.

Wine Making in Sonoma County
Sonoma is considered the birthplace of wine-making in California, dating back to the original vineyards of Mission San Francisco Solano, then improvements made by Agoston Haraszthy, the father of California viticulture and credited with introduction of the Zinfandel/Primitivo grape varietal. The Valley of the Moon Vintage Festival takes place late each September, and is California’s oldest celebration of its winemaking heritage.
Today, six mayor valley areas contain the principal population centers of the county. In the south part of the county are located Sonoma Valley, drained by Sonoma Creek, and Petaluma Valley, drained by Petaluma Creek; both of these streams are tributary to San Pablo Bay. To the north are the valleys of the Russian River watershed. These include Cloverdale Valley, Alexander Valley, Dry Creek Valley, and the Santa Rosa Plain. Smaller valley areas include Rincon Valley, Kenwood Valley, and Bennett Valley, all tributary to Santa Rosa Plain, and Knights Valley and Franz Valley, which are tributary to the Russian River.
Jenner California is situated at the mouth of the Russian River at the Pacific Ocean. It is an area blessed by natural beauty and is a gateway inland to the fabled wine country of both Sonoma and Napa Counties.

Jump to a Rental